SimulaQron simulated quantum internet hardware to allow you to program your own quantum internet applications. Programming quantum internet applications asks you to combine several skills: First, you would like to be able to program a local quantum computer. Second, however you must realize classical communication between network nodes which preferrably integrates seamlessly with the quantum instructions on distant quantum computers. This bring many software engineering challenges that go beyond “simply” programming a local quantum computer, and good frameworks to realize such software, nice libraries etc are presently not known. We built SimulaQron to enable you to explore and develop such concepts!

Details of SimulaQron’s inner workings can be found in this paper , see Getting Started for links to the documentation. 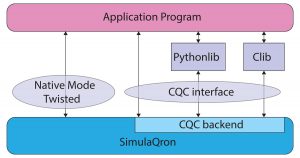 SimulaQron provides a distributed simulation that can be based on any existing quantum simulator capable of being integrated into Python. SimulaQrons backend consist of a server program – one for each node in the simulated quantum internet – that may run on one of different classical computers. These servers establish connections between them to realize a distributed simulation of quantum entanglement.

Applications can be programmed using SimulaQron in several ways:

Get the code. Report bugs. Contribute!

The full code can be freely accessed on GitHub. Here you can also report bugs, make feature requests or even contribute with your own code.